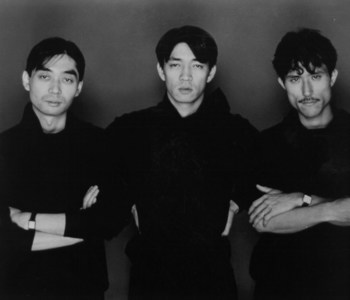 Yellow Magic Orchestra is a hugely influential Synth-Pop/proto-techno supergroup that has been called the Japanese equivalent of Kraftwerk, while their influence inside their home country has been likened to The Beatles. They helped pioneer synthpop, modern J-pop, techno, and house music. The band was one of the first to use Sampling: alongside David Byrne and Brian Eno's My Life in the Bush of Ghosts earlier that same year, YMO's 1981 album Technodelic was one of the first albums by a major artist to be primarily composed of samples.

Core members Haruomi Hosono, Yukihiro Takahashi, and Ryuichi Sakamoto had worked together off and on throughout the 1970s, and each had worked with early electronic instruments. However, it was Sakamoto's introduction to Kraftwerk, as well as a desire to make music that didn't ape Western musicians, that pushed them to create their own band. Shortly after Hosono's 1978 exotica-tinged album Paraiso (credited to Harry Hosono and the Yellow Magic Band, which featured Sakamoto and Takahashi contributing as session musicians), they decided to use the name Yellow Magic Orchestra, parodying the faddish fascination with black magic in Japan at the time. Their debut album was intended to parody Western stereotypes of Asia (and its offensive fascination with "orientalism" going on at that time) while also exploring Asianness and the potential that came from mixing western electronic and funk sounds with traditional Japanese compositional techniques, blending Sakamoto's classical training with Hosono & Takahashi's pop expertise.

Intended mostly as a joke, the album was a surprise hit, prompting the band to go on tour. One of these live performances was seen by an American A&M Records executive, and by the end of 1978 they had an international record deal, prompting the three to shift from solo careers and session work to a popstar lifestyle as YMOnote Sakamoto and Takahashi still maintained active solo careers for the entirety of YMO's existence, with Hosono starting up again in 1982.

Over the next few years, YMO was the most popular band in Japan, and was regularly charting in America and Europe (despite their distribution being much spottier in those regions), with sold-out tours in all three areas. For 1979's Solid State Survivor, the band brought English lyricist Chris Mosdell to write English lyrics, producing the song "Behind the Mask", which would later become a hit for Michael Jackson and Eric Claptonnote Jackson even wrote additional lyrics for the song, which have since become standard for it. Both it and the follow-up, ×∞Multiplies, were on the Oricon charts at the same time for seven weeks, a record that still stands. The band's music became a major influence on early Techno and Hip-Hop pioneers, with Sakamoto's solo piece (and YMO live staple) "Riot in Lagos" seen as both the Trope Maker for electro and one of the first songs to have a "techno" beat. After sampling "Firecracker" for his song "Death Mix," Afrika Bambaataa jokingly claimed YMO "invented Hip Hop." The band's work also had an inevitable effect on Japanese Pop Music itself, in particular influencing the development of City Pop through their eclectic blend of styles. Their later albums shot straight to the top of the Oricon charts, and their 1983 single "Kimi ni, mune kyun." was the highest charting Synth-Pop song in Japanese history at #2 — a record the song held until synth-pop idol group Perfume released "love the world" in 2008.

After making the concert film Propaganda, YMO "spread out" in 1984: although they shifted back to solo careers, the members would frequently perform with each other. They briefly reunited to record Technodon under the name of Not YMO (or "YMO" with an X through it) in the early 90s (as Alfa Records still owned the name Yellow Magic Orchestra at the time), and occasionally performed live as Human Audio Sponge. They officially reunited in 2007 as HASYMO, first for a Kirin beer commercial and single "RYDEEN 79/07," and then live at the Live Earth, Kyoto event on July 7, 2007. The band officially reverted to the name YMO in 2009 and released the single The City of Light / Tokyo Town Pages that same year. No new recordings have been planned, though the band members have continued their touring schedules, up until Sakamoto was diagnosed with throat cancer in 2014. After Sakamoto recovered, the band have continued to live on as an on-again, off-again live act, performing YMO material both together and as part of solo shows (under the sole condition that they only be billed as YMO if all three are present).

Not to be confused with Electric Light Orchestra.

Formed in 1978, Yellow Magic Orchestra (a.k.a. YMO) are a Japanese electronic supergroup credited as one of the trope makers and trope codifiers of synth-pop, together with Kraftwerk. They have been cited as influences by a wide number of other musicians in the genre, and helped popularize a multitude of equipment that would play key roles in furthering synth-pop's development throughout the 1980s. Shown here is their 1979 song "Rydeen".

Formed in 1978, Yellow Magic Orchestra (a.k.a. YMO) are a Japanese electronic supergroup credited as one of the trope makers and trope codifiers of synth-pop, together with Kraftwerk. They have been cited as influences by a wide number of other musicians in the genre, and helped popularize a multitude of equipment that would play key roles in furthering synth-pop's development throughout the 1980s. Shown here is their 1979 song "Rydeen".