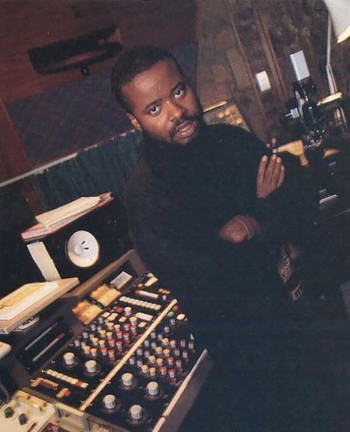 The Initiator
I wish I could escape from this crazy place
Fantasy or dream, I'll take anything
Suddenly surprise, right before my eyes
All I see are stars, and other cosmic cars
- "Cosmic Cars"
Advertisement:

Juan Atkins is an African-American record producer and DJ, known mainly for his association with the Detroit techno scene. Born in Detroit, Michigan on September 12, 1962, Atkins began playing bass as a teenager and moved on to keyboards and synthesizers after being turned on to their use in Parliament records. He would also be inspired by seminal electronic and funk music acts such Kraftwerk, Yellow Magic Orchestra and Prince, most of which introduced to him by Detroit radio personalities like The Electrifyin' Mojo. Atkins would also meet Derrick May and Kevin Saunderson, two of his fellow classmates at Belleville Junior High School, all of which shared the same influences. He would also buy his first synthesizer, a Korg MS10, and began recording with cassette decks and a mixer for overdubs.

Atkins later studied at Washtenaw County Community College in nearby Ypsilanti, where he met Rick Davis, a synthesizer expertand fellow Electrifyin' Mojo fan. Davis had even released an experimental record used by Mojo to open his radio show. The two would later begin to record as a duo under the name Cybotron and released their first single, "Alleys of Your Mind", in 1981, followed by the spacey "Cosmic Cars" in 1982 and the genre-defining "Clear" in 1983, all on their own independent label Deep Space Records. The idiosyncratic synthesis of groove-based funk and synthesizer squeals would be the signal fire for the new wave of black American electronic music and despite its crossover success being limited at the time, it went on to become one of the most influential styles for the new electronic music of the next decade.

Commonly referred to as the "Godfather of Techno" and the "Originator of Detroit techno", he is often considered to be one of (if not, the) main pioneers of genre and one of the first artists from the scene to start referring to their music as "techno". Because of this he is commonly marked as an influence on future techno and techno-inspired artists such as Autechre and Aphex Twin.