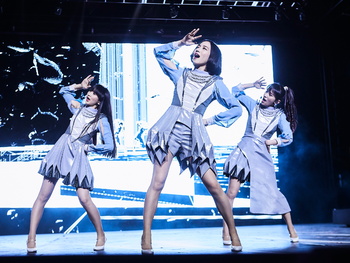 Perfume is a three-person electropop Girl Group hailing from Hiroshima, Japan. Formed in 2000 as trio of standard fare pre-teen Idol Singers; it was the influence of Record Producer Yasutaka Nakata (of electro house duo capsule) that gradually transformed them into a self-described "Near-Future Technopop Unit", although it was several more years before that translated into commercial success.

When success finally came, it made history – Perfume were the first techno act ever to debut at #1 on the Oricon weekly charts with their single "love the world". And the album GAME was only the second-ever techno album to reach #1 in Japanese pop music history. note  The first was Yellow Magic Orchestra, a band often called the Japanese Kraftwerk, in 1983; but their biggest single, "Kimi ni Mune Kyun", only went as high as #2.

The group's name comes from the kanji 香 found in all three of the founding members' names (it's the ka in Ayaka, Yuka, and Yuuka); it means 'fragrance' …so yeah.

The members, easily distinguishable by their different hairstyles and way of dressing, are:

Perfume are noted for their energetic and charismatic on-stage performances complete with coordinating costumes, intricate choreography executed with military-like precision and, more recently, advanced technology. And because they're seen as wholesome, naturally beautiful women singing technopop that is accessible to the masses, they have a Multiple Demographic Appeal, from young girls to middle-aged men (and whoever's in between).

Not to be confused with The Other Perfume, or Perfume Commercial.