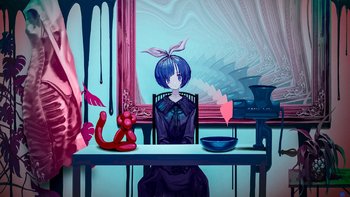 x0o0x_, also known as "guest" (Japanese: ゲスト) on Nico Nico Douga, is a Japanese music producer and utaitenote Japanese term referring to cover singers active primarily on the internet, known for releasing nameless music videos on Nico Nico and YouTube. A Reclusive Artist with a completely unknown real identity who uses impossible-to-search nameless channels and videos, x0o0x_ has gained memetic popularity on English YouTube because of this intense reclusion.

x0o0x_'s reclusive behavior in fact originates from the behaviors of Japanese music producer Koronba, who uploaded music on Nico Nico from 2008-2016, but actively attempted to prevent the spread of their name and works, and eventually deleted all of their social media accounts after an outburst on Twitter. Koronba's catchy songs, extreme reclusiveness, and tragic end ironically gave them a cult following and inspired numerous tribute channels, with x0o0x_ being one of themnote Other notable tribute channels include Subete anata no sei desu (全てあなたの所為です

for the many background illustrations in their original music videos.

The artist's official YouTube channels are both nameless; much of the community, both in Japan and in the West, uses the name x0o0x_

. They also have a channel on the Chinese video website Bilibili.