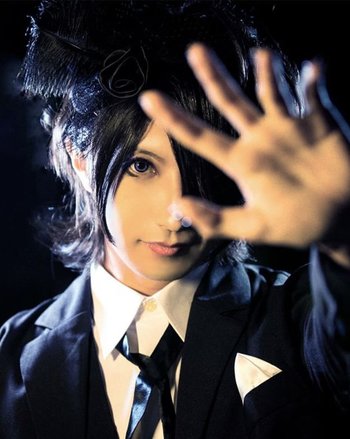 "Machigeri-time"
Machigerita is a Japanese singer, song writer, and composer who first got famous for being a Vocaloid producer. Though he has seemingly retired from Vocaloid, he still keeps his musical career going by writing songs for other artist while also preforming his own songs. He also founded the band "NILADMIRARI" which became the name for one of his projects. He also writes novels based on some of his works.
Advertisement:

He is the composer for Tsukiuta's January representatives, Hajime and Yuki, as well as the original songs in the series' 4th and 6th stage plays Lunatic Party and Kurenai Enishi

Tropes applying to Machigerita and his music: