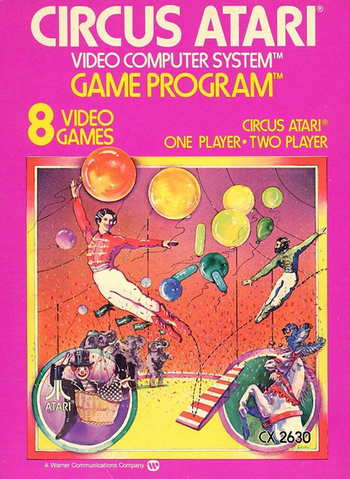 Circus is a 1977 arcade game by Exidy, which was ported to the Atari 2600 in 1980 as Circus Atari by Atari. The arcade version was also distributed by Taito under the title Acrobat and cloned by Bally/Midway as Clowns. An Atari 7800 homebrew remake called Super Circus Atari Age was developed and published by AtariAge.
Advertisement:

In the game, the player controls a seesaw which is used to keep a pair of acrobats bouncing in the air to pop three rows of balloons moving across the top of the screen. To catch an acrobat, he must land on the unoccupied side of the seesaw, which then sends his associate into the air, depending on what angle of the seesaw the acrobat lands on. If the player fails to catch the acrobat, he will land on the ground and go splat.

The original arcade game is currently freely and legally available for download to use on the M.A.M.E. emulator.