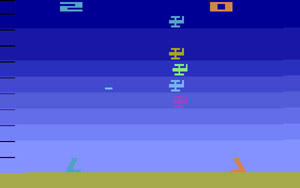 Air-Sea Battle was one of the Atari 2600's launch titles in 1977. It was a series of 27 Side View one player, Competitive Multiplayer, or Player Versus Player shooting gallery games. It was based on a 1975 Atari arcade game called Anti Aircraft. Each game lasts 2 minutes and 16 seconds, and the object is to score more points than your opponent by shooting targets that move from side to side across the screen.
Advertisement:

The difficulty switches are used to handicap the games, changing the size of your missiles.