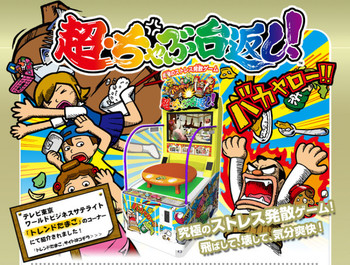 It's as weird as it looks.
Advertisement:

Cho Chabudai Gaeshi ("Super Table Flipping") is an Arcade Game developed and published by Taito and released in 2009 in Japan.

An unusual game based around table flipping, the game has a selection of levels all featuring people annoyed with their current situation and the people around them - and what better way to get out your frustrations than flipping a table and knocking everyone and everything in front of you over, trying to cause as much damage as possible to your surroundings? Your controller is, of course, a table - keep slamming your hands down on it to get people's attention and build up the power meter, then flip the table at the right moment!

The game was first released in Fall 2009, and would later get a sequel, Cho Chabudai Gaeshi 2, adding 3 new levels and multiplayer mode to the original game.