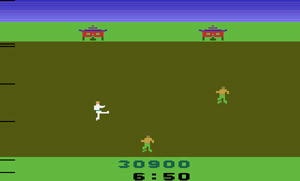 Chuck Norris: Superkicks is an early Beat 'em Up, released in 1983 by XONOX for the Atari 2600 as part of their "double-ender" series of two-game cartridges. Also released for the Colecovision, VIC-20 and Commodore 64. After the licensing deal expired, the game was retitled Kung Fu Superkicks when it was published by TeleGames USA.

You play Chuck Norris, on his way to rescue somebody from a monastery in Japan. Chuck has six minutes to get to the monastery. The game begins in a vertically scrolling overworld, with two paths and grass. If you step into the grass, you lose time at a much faster rate. As you walk down either path, you are ambushed by Mooks, and taken to the fight screen.

In the fight screen, you face three enemies, one at a time, who run back and forth and throw shuriken (throwing stars). If an enemy hits you, he knocks you down, and you become a sitting duck for a shuriken. If a shuriken hits you, you lose time and are sent back to the start of the path. You have three moves: punch, kick, and block. These enemies block the upper part of their body, so you defeat them by kicking. The block can protect you from shuriken.

Having defeated the mooks, you continue on the path. You get to a point where the two paths meet; this is a Checkpoint. You receive a new belt, showing the progress of your training, and another minute. The path once again splits, this time in three. Only one path is correct; the other two are blocked by fallen trees. The correct path is randomly determined, so this is a Luck-Based Mission. You'll face another ambush on each path, and this time the enemies block low, so you punch them.

Having made it past mooks and fallen trees, you get to another check point. This time, in addition to your belt and minute, you get a new move, the Somersault Superkick. This move replaces the block, and works against enemies regardless of how they're blocking. Which is good, because enemies are going to start blocking either high or low.

And so it goes until you reach the monastery. Inside, you face a Multi-Mook Melee of Ninjas, who start turning invisible, and their shuriken just knock you down. The more of them you defeat, the longer they stay invisible, until poor Chuck can do nothing but wander around a seemingly empty room, taking shuriken from bad guys who appear out of nowhere. The game ends when you run out of time. You never get to rescue whoever it was you were after.