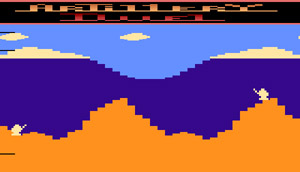 Artillery Duel was a Side View, Player Versus Player, Turn-Based Strategy Artillery Game, released in 1983 by XONOX as part of their "Double-Ender" series of two-game Atari 2600 and Colecovision cartridges. Artillery Duel does what computers were first built to do back in World War II: calculate artillery trajectories. It was the first successful example of a genre that goes back to the mid-'70s (and includes later hits like Scorched Earth and Worms).
Advertisement:

Each player controls an artillery piece, dropped out of the sky into a randomly chosen terrain. Each player has 15 or 30 seconds (depending on the difficulty level) to adjust barrel angle and powder charge, then fire the round. Wind is a factor, rising and falling, or even changing direction. Terrain can get in the way of the shots, forcing the players to use high barrel angles, but sometimes the guns fall within each others' line of sight, giving the players easy shots with low angles and high powder charges.

When a player hits the other player's gun, he scores a point, there is a Cutscene of two soldiers marching, and the game moves to a different terrain.