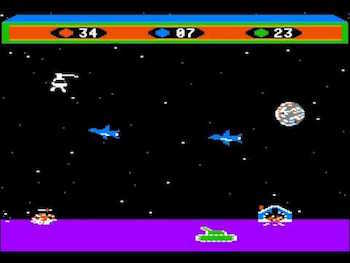 Being a hero isn't easy, or everybody would be one.
Advertisement:

In an international incident, the militaristic Bungeling Empire has kidnapped the 64 delegates to the United Nations Conference on Peace and Child Rearing. Exploiting an ancient treaty with the United States, you have disguised a helicopter as a sorting machine and smuggled it to a mail distribution center near the border where the hostages are being kept. An opportunity comes when one of the Bungeling's barracks suddenly catches fire, and the hostages run about frantically. As Bungeling planes and tanks approach, you rush to your chopper, seizing this brief opportunity for heroism...

Choplifter! is a side-scrolling action game developed by Dan Gorlin and published by Brøderbund Software in 1982. Initially released for the Apple ][, its popularity soon caused it to get ported to every major home computer and video game system available, as well as an arcade version from Sega.

The game itself is very simple — fly your helicopter across the border, rescue hostages, and return them to the safety of the nearby post office. The wrinkle is that the chopper and the hostages are very fragile; a single hit is enough to shoot down the player, and hostages are quickly killed if they are crushed by tanks, shot by gunfire, or squashed by the chopper's landing skids.