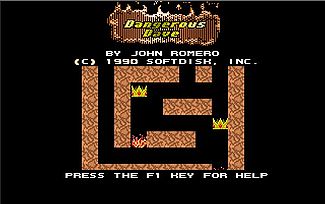 Dangerous Dave is a 1988 computer game by John Romero. It was developed for the Apple II and DOS as an example game to accompany his article about his GraBASIC, an Applesoft BASIC add-on, for the UpTime disk magazine.
Advertisement:

The object of the game was to collect gold cups to move on to the next level. Since the original 1988 publishing of Dangerous Dave on UpTime, there have been three ports of the original to other platforms. There is also a sequel, kind of, as that game is completely unrelated to the first in both story and gameplay: Dangerous Dave in the Haunted Mansion. The sequel itself has two other sequels.

The idea of Dangerous Dave came to John Romero under the influence of Super Mario. There are definitely similarities that are easily noticeable, such as the secret levels, the level design, the monsters, and the jumping. The mission is to guide Dave through ten levels, collecting trophies in the hideout of his enemy, Clyde. It is one of the earliest commercial PC games to support VGA mode.