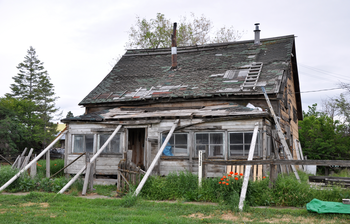 It's a bit of a fixer-upper.
"Ahh, home crap home!"
— Walter, The Money Pit
Advertisement:

So, a character just bought a new house. Maybe it's a Big Fancy House, or maybe it's something a bit more humble. The Real Estate Agent says it's a great deal. What Could Possibly Go Wrong?

But then they move in, and suddenly things take a turn for the worse. The stairs squeak, then collapse. You try to take a shower, but only end up Covered in Mud. The faucet in the master bathroom won't stop dripping. The back door is being eaten by bugs. If it works at all, the stove in the kitchen chars everything cooked on it, and that's only the times when it doesn't go off in someone's face like an Improvised Incendiary Device. And it appears a family of skunks is living in the attic.

Uh oh. They've bought The Alleged House and been Lured Into a Trap. Unfortunately, this trope is all too common in real life. May or may not also be an Old, Dark House, and god help you if it's also haunted. Compare The Alleged Car and The Alleged Computer for the automotive and computer equivalents. Contrast Cool House. If it's a Cool House hiding in alleged house clothing, see What a Piece of Junk and/or Not-So-Abandoned Building. Also compare Lonely Bachelor Pad. See also Horrible Housing, with which this can overlap; that trope is a crappy home being used to mark a character as poor.

If someone sold you one of these, he's likely a Shady Real Estate Agent.

Goldie's old home is condemned and quite clearly falling apart, but she denies this and convinces Ham to have the party there. It actually starts collapsing in the middle of the party.

Goldie's old home is condemned and quite clearly falling apart, but she denies this and convinces Ham to have the party there. It actually starts collapsing in the middle of the party.