Western Animation / Pontoffel Pock, Where Are You? 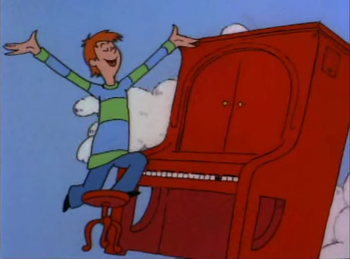 Pontoffel Pock, Where Are You? (also known as Pontoffel Pock and His Magic Piano) is a animated television special written by Dr. Seuss and produced by DePatie-Freleng Enterprises. Along with The Hoober Bloob Highway, it's the only Seuss-based special not to be based on one of his books or pre-existing characters.note Although Hoober Bloob recycled the gatekeeper from I Had Trouble In Getting To Solla Sollew for Mr. Hoober Bloob.

Pontoffel Pock is a quiet young man who just wants a simple job and to take care of his family's dilapidated house, but when he blows his first day at the local pickle factory, he wishes that he could just "get away from it all." With those words, he's visited by the Amalgamated Do-Gooding Fairies who gift him with a magical piano which allows its player to go anywhere in the world.