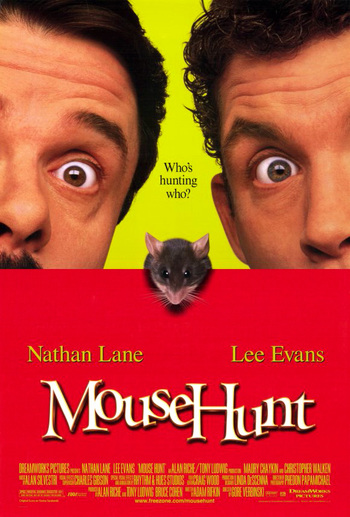 "Who's hunting who?"
Ernie Smuntz: We can't handle any more intrusions.
Caesar: Sure. That's how you perceive it. But to that mouse, you are the intruder.
Advertisement:

Imagine if you were to create a comedic movie that's a cross between Tom and Jerry and Home Alone, have it star what looks like Mario and Luigi (or Laurel and Hardy) as the protagonists, set it in a Retro Universe of the 30's/40's and today, and for good measure, give Christopher Walken an extended cameo. The result would be this film.

Nathan Lane and Lee Evans are Ernie and Lars Smuntz, brothers with a recently deceased ruined father. In his will, he leaves them "the future of string" — a Steampunk string factory with No OSHA Compliance — and a seemingly worthless Victorian mansion. Oh, and some spoons, a half box of cigars, and a ceramic egg. But then the duo discovers that the abandoned house could be worth millions if it were renovated. Unfortunately for them, the place is already inhabited by a single rodent, and it ain't leaving. Hilarity Ensues as the unexpectedly clever mouse thwarts the brothers' increasingly elaborate Zany Schemes to kill it, all while they have to deal with improbable house payments and the string factory's revolting employees.

This was the 1997 directorial debut of Gore Verbinski, who later gave us the Pirates of the Caribbean films and Rango. This was also one of the first movies released by a fledgling little company called DreamWorks and the one which established their rivalry with Disney. One wonders if they made the film center around a mouse just to be ironic.

Given its odd combination of Slapstick and Black Comedy in a Retro Universe setting, the movie only did moderately well with critics and audiences, but has eventually become a modest Cult Classic.

"A world without string is chaos."

You could say it went down the drain.

You could say it went down the drain.