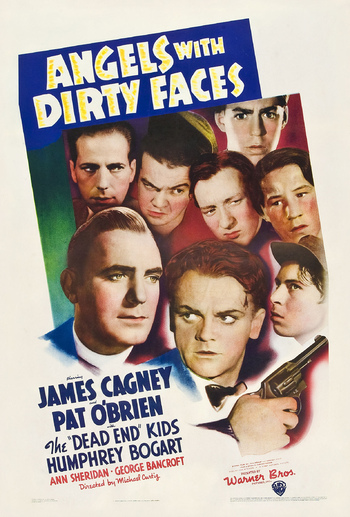 "All right, fellas... let's go and say a prayer for a boy who couldn't run as fast as I could."
Advertisement:

Angels with Dirty Faces is a 1938 Warner Bros. gangster film directed by Michael Curtiz and starring James Cagney, Pat O'Brien, the Dead End Kids and Humphrey Bogart, along with Ann Sheridan and George Bancroft. The film was written by Rowland Brown, John Wexley and Warren Duff with uncredited assistance from Ben Hecht and Charles MacArthur.

The story starts out with two inner-city kids who were caught stealing fountain pens, Rocky Sullivan and Jerry Connolly. Rocky was captured by the police and sent into reform school while Jerry escaped, being able to run faster. Rocky grew up to become a notorious gangster, while Jerry grew up to be a priest. When Rocky (Cagney) returns to live in his old neighborhood after being discharged from prison, Jerry (O'Brien) tries to prevent the local kids from idolizing Rocky, who befriends them whilst continuing his criminal ways.

Not to be confused with Angels with Filthy Souls (though it was inspired by the film) or the dragon-dating Visual Novel Angels With Scaly Wings. And besides also starring The Dead End Kids, is unrelated to the later film The Angels Wash Their Faces.