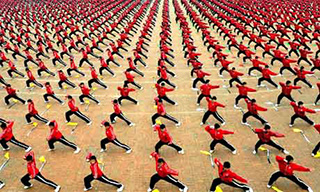 In Japanese media, an unusually high percentage of Chinese people will know a martial art, from the harsh, half-senile Old Master, to the petite young woman. It will always be a form of Kung Fu, never a Japanese style. Just as the Dashing Hispanic isn't necessarily from Spain or its colonies, in some works all Chinese people may know Kung-Fu because they belong to a fictional version of Chinese culture based on this stereotype. Regardless, it's not unusual for this trope to involve some sort of Chinese rival or Chinese rival team. If you're lucky, this will lead to a scene where Everybody Was Kung-Fu Fighting.

The prevalence of this trope can likely be explained by the Japanese people's fondness for the martial arts action of modern Hong Kong cinema, and of ancient Chinese classics such as Journey to the West and Romance of the Three Kingdoms. Consequently, characters falling under this trope often contain references to Hong Kong action stars.

All Asians Know Martial Arts is the equivalent of this in Western media, and is about how Westerners view Asians. In contrast, this trope is about how Japanese (one Asian group) view Chinese (another Asian group).

In Real Life, Chinese will refer to a person's ability in any human endeavour as "Gung Fu," not just martial arts. Also, all Chinese students receive compulsory military training during their educational period, so they are knowledgeable in martial arts. So it's quite technically true... That said, do not antagonize anyone who is praised as having good Wu Gong as they will be real life examples of this trope.

The anthropomorphic animal equivalent of this is a Fighting Panda.