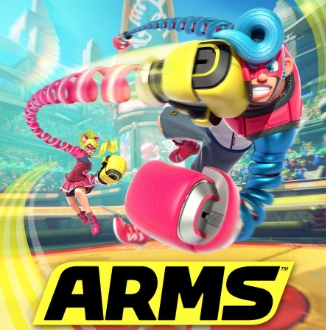 Armed and dangerous!
ARMS. More than mere limbs, capital A-R-M-S can extend like springs, an unusual ability shrouded in mystery. [...] In fact, one of the ARMS fighters, Spring Man, had this to say:

"I was shocked at first, but having arms like this is actually pretty rad."
— Narration from May 2017 Nintendo Direct
Advertisement:

ARMS is a boxing/fighting game made for the Nintendo Switch from the same development team behind the Mario Kart franchise. Revealed during the January 2017 Nintendo Switch Presentation, the game (appropriately) features follows numerous characters that fight using long, extendable arms. A series of online demo periods, called "Global Testpunches," were held May 26-28 and June 2-4. The game was released on June 16, 2017.

ARMS uses motion controls, much like the Wii's Wii Sports and Punch-Out!!, though the gameplay style is more akin to Sega's Virtual-ON series of fighting games. It also has the option for traditional button controls, though Word of God says using traditional controls may limit players' skills.

In 2017, a graphic novel series based on the game published by Dark Horse Comics was announced, with Ian Flynn writing. After a teaser of the first volume, "Contenders", was given away during Free Comic Book Day 2018, it more or less dropped off the face of the Earth to languish in Development Hell; though it was stated to still be in the works as late as 2020, it turned out to have been Quietly Cancelled when Flynn updated his personal webpage

Min Min appears in Super Smash Bros. Ultimate as the first fighter of the Fighters Pass Volume 2 DLC set, alongside a Mii Brawler Costume for Ninjara. Before that, the game had a good amount of ARMS content on launch; Spring Man as an Assist Trophy, he and Ribbon Girl as Mii Brawler costumes, and a number of Spirits, including Min Min herself.

Not to be confused with Wild ARMs.

Biff: As another TV Tropes article draws to a close, I'd like to thank all the tropers and the fans at home. See you next time, folks!

Min Min activates her ARMS to claim the invitation to Smash Bros. for herself.

Min Min activates her ARMS to claim the invitation to Smash Bros. for herself.