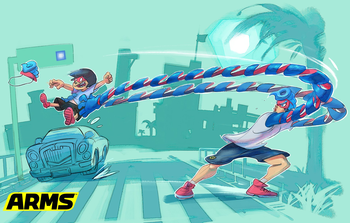 That fan should be proud when he sees Spring Man in action!
This character can stretch certain parts of their body outward great distances, though how far the parts can stretch varies from character to character. The body part in question is usually their arms, though stretchy legs and the like aren't unheard of. These limbs are incredibly useful for combat or even simple practicality, as it's like having a fully controllable whip with a claw or blunt object at the end. They could be "natural" limbs or artificial ones.

Related to but distinct from Rubber Man; while a rubber man is able to mold and shape their whole body without much care for physics, someone with extendable limbs is limited by the limbs they're able to stretch, and still abide by the physiology of their species. For example, a man made of rubber might flatten and enlarge his hands to flip someone like a pancake, while someone with extending arms can only stretch them to grab at or punch something.

Compare Prehensile Hair and Creepily Long Arms. If you are looking for the Toon Physics joke, see Elongating Arm Gag.

Mario can use Magic Circles to extend his arms and fold walls.

Mario can use Magic Circles to extend his arms and fold walls.