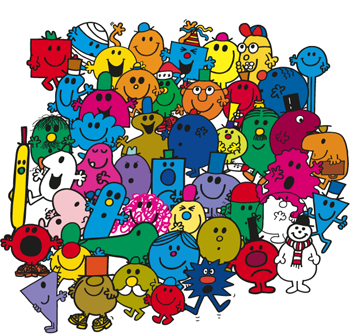 Once upon a time, there was a man called Roger Hargreaves. In 1971, his son Adam asked him the question, "What does a tickle look like?" He answered it by creating Mr. Tickle. This became the first in a series of books about the Mr. Men and Little Misses.

The titular Mr. Men and Little Misses are a group of abstract human beings (a.k.a. talking shapes) who're essentially the Anthropomorphic Personifications of the many character traits everyday people have. Every Mr. Man and Little Miss has a distinct characteristic that defines their entire being, and are named after that characteristic (Mr. Forgetful, Little Miss Trouble, Mr. Wrong, Little Miss Wise, etc.) Each of the original books stars one of the characters, who has a brief adventure revolving around their character trait. And the sun has a face on some occasions.

There have been four animated series based on the books. The first two, Mr. Men (1974/1983), and Mr. Men and Little Miss (1995-1997), were based closely on the original stories. The third, The Mr. Men Show (1997), was a redubbed version of the 1990s stories and featured live-action comedy segments. The fourth, also called The Mr. Men Show (2008), was a Denser and Wackier sketch show featuring the characters.

, they are owned by Sanrio, the creators of Hello Kitty. Since Roger Hargreaves' death, Adam has continued the line with new books.

In 2017, an unusual Spinoff launched: a series of books plus a line of tie-in merchandise adapting characters from the beloved Science Fiction show Doctor Who into these books' art style and story format. Each book features one of the Doctor's many incarnations (specifically the ones numbered One through Thirteen) with the titling convention of Dr. First, Dr. Second, and so on. Tropes featured in this spinoff have their own listing below.

In 2019, a second Spinoff line launched: a series of books based off

The characters also appeared on Arby's kids' meals in the 1980s.

Now has a character page

Legend has it that Mr. Chatterbox never runs out of things to talk about.

Legend has it that Mr. Chatterbox never runs out of things to talk about.