Men Are Generic, Women Are Special 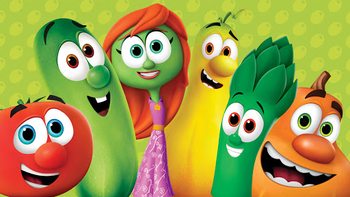 So that's what female vegetables look like! I'll have to remember that next time I'm at the grocery store.
"If a smash hit has mostly male characters, nobody raises an eyebrow, but if it has mostly female characters, it's a Great Big Anomaly worth several trees' worth of shocked speculation."
— Sarah Morayati, author of the Interactive Fiction work Broken Legs, in an interview discussing gender in fiction
Advertisement:

In media, male is the default, "normal" form of humanity, while female is a special subcategory reserved just for women. This meta-trope is Older Than Feudalism and is found not only in fiction, but is ingrained into many human societies and cultures. The technical term for this is "androcentrism."

Take the English language, for example. The terms "Man" and "Mankind" are often used to represent humanity in general, whereas "Woman" and "Womankind" only ever refer to humans of the female gender. Many job titles, such as fireman and mailman, assume maleness, even though there are female firefighters and mail carriers. People often specify that someone is a "female doctor" or "female author", but generally don't say "male doctor" because that is already assumed.note There is an interesting twist in the etymology of "man" and "woman". Originally, "man" only meant "human in general". There were more specific words, namely "were"/"wereman" (= "were" + "man") for "male human" (now only survives in "werewolf" ("man-wolf")) and "wife"/"woman" (= "wife" + "man") meant "female human". Eventually, "man" completely displaced "were"/"wereman" and came to mean "male human" also, while "woman" became dominant in the exclusive sense of "female human", and "wife" retained only the stricter sense of "female spouse". Grammatically speaking, back when English still had the concept of gender, "man" was grammatically masculine despite its supposed gender neutrality, which led to the absurd fact that "woman" was consequently also grammatically masculine. Not that grammatical gender makes any sense anyway, since the word "wife" and its relatives in other Germanic languages were neuter for some reason. The same situation happened for the Romance languages (French, Italian, Spanish, etc.) where the Latin word "homo" ("human", masculine) also replaced the word "vir" ("male human"). Also note that "female" has nothing etymologicaly to do with "male", and it spells that only since 14th century (before that, it was femella). If the gender of a person is unknown, it is sometimes argued that the traditional proper pronoun to use is "he" (e.g. "Everyone comes to a point in his life...") – though "singular they" goes back to Geoffrey Chaucer but remains controversial even today, reflecting this trope. Certain languages like French and Spanish take this concept even further, having two words for "They"; a masculine and feminine form, but if there is a mixed group of men and women the masculine is the default. In fact, this is correct even for a group of any number of women, and one single man.

Grammatically speaking, in languages featuring gender, masculinity generally prevails and is the default. Adjectives and past participles, as well as nouns for humans, are overwhelmingly masculine by default; feminine equivalents are always derivative, with specific suffixes. For example, in French, a female hunter is "chasseuresse" or "chasseuse", with the feminine suffixes "-esse" and "-euse" attached to the masculine form "chasseur"; in German, you add "-in", so a (male) chancellor is "Kanzler" and a female one is "Kanzlerin"; in Italian, Spanish, Portuguese, you swap "-o" for "-a", or stick "-a" to the masculine forms. The use of feminine words is pretty much always exclusive, in that a person or group of people have to be known explicitly as all-female only for the words to be usable; if there is even a hint of ambiguity, like say a theoretical group of "1000 women and 1 man", languages will default to masculine words, be it pronouns or nouns. Feminine-by-default nouns are generally reserved for higher, more abstract concepts such as "humanity", "manliness", "affliction", etc. rather than anything to do with concrete biological sex. The only notable exceptions are animals: many words for animals are feminine by default, and they refer to a species as a whole (which results in expressions such as the grammatically feminine French phrase "une girafe mâle" ("a male giraffe")), and to a lesser extent, specifically the female animals of that species (e.g. French "une chèvre" ("a (female) goat"); still, masculine derivatives are extremely rare (e.g. French "un girafeau" ("a baby giraffe")), and the males tend to have their own words instead (e.g. French "un bouc" ("a male goat").

The trope can be observed in many different elements of society and culture. "Unisex" fashion tends to be built around men's fashion; jeans and shirts are worn by both sexes, but dresses and skirts are exclusive to women in most of the Western world (with the famous exception of the kilt). T-shirts are typically sold in two cuts, women's and mens, but men's T-shirts are sometimes sold as "unisex tees." Most androgynous names (like Jordan or Taylor) started out as men's names. The restroom sign for a man is a featureless stick figure, but the sign for a woman is a stick figure in a dress. (One could imagine an alternate universe where women are represented as a featureless stick figure, and men are represented with a cowboy hat.) In the eyes of society, male is default, and women are basically men plus or minus something else.

This phenomenon carries Unfortunate Implications for both male and female characters when used in fiction. The main problem for male characters is that maleness is not special in the way femaleness is, and is often undervalued to the point of being disposable; men's actions are less likely to be judged based on their gender, which gives them more freedom to act, but the consequences for their actions are likely to be magnified. The implication for female characters is that femaleness is special in a way that maleness isn't or, to put it more bluntly, being male is "normal", while being female is "abnormal", which can either mean superior to men or inferior.

This leads to The Smurfette Principle, in which a character's femaleness is the most important and interesting thing about her, often to exclusion of all else. It also tends to result in works failing The Bechdel Test, because if there's a potential character who doesn't have to be any particular gender, the role will probably be filled by a male character by default. It may or may not be the result of Gender Rarity Value. Sexy Dimorphism inverts this, by giving male monsters varied designs and making female monsters into Cute Monster Girls that don't look that different.

Likely exacerbated by the fact that Most Writers Are Male.

Probably the parent to Men Act, Women Are and Men Are Strong, Women Are Pretty. See High-Heel–Face Turn for when being a woman becomes a Chekhov's Gun for a Heel–Face Turn. Compare Men Are the Expendable Gender and Samus Is a Girl.

The gender of a robot.

Despite lacking gender, despite being little more than a blocky robot. People generally assume Bastion to be male even though it has no gender, exactly because it's the 'default'.

The gender of a robot.

Despite lacking gender, despite being little more than a blocky robot. People generally assume Bastion to be male even though it has no gender, exactly because it's the 'default'.