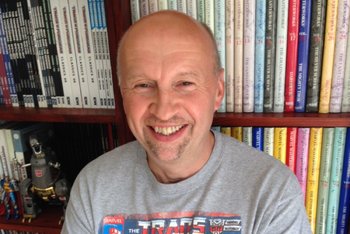 Simon Christopher Francis Furman is a British comic book writer. He has worked on a wide variety of licensed and original properties, but is most reknown for his long-time work on the Transformers Comic Book franchise.

His professional career began in 1984 with the opening episode of "Terror of the Cats", in issue 3 of Fleetway's weekly comic Scream! He later moved over to Marvel UK, where creators were in high demand — at the time, many British comics were published weekly, so additional material was needed to fill in the gaps from their American counterpart's monthly schedules. There Furman worked on numerous original and licensed properties such as Doctor Who, Action Force, Dragon's Claws, and Transformers.

Furman's work on The Transformers eventually led to his worldwide fame; when longtime American Transformers writer Bob Budiansky stepped down from the role, Furman was logically selected to replace him. But where Budiansky targeted a pre-teen audience with lighthearted action-adventure stories, Furman eschewed that, instead adding an undercurrent of pseudo-religion and lore to the Transformers mythology (much of which he had previously introduced in his UK work). He reframed the robotic civil war as part of a larger ancient struggle between mechanical gods, with the Transformers themselves destined to be a warrior race against Unicron. This change in tone captivated the older fandom, and Furman was soon accepted as the definitive writer of Transformers stories. It is not a stretch to say that Furman has probably had more influence on the entire Transformers mythos than any other writer.

Outside of Transformers, Furman is also known as the co-creator and chief writer of Death's Head (who was originally created as a throwaway character in the Transformers UK series). The character instead was so beloved that he was spun off into his own line, eventually becoming a staple of Marvel UK comics in the 1980s and 90s.