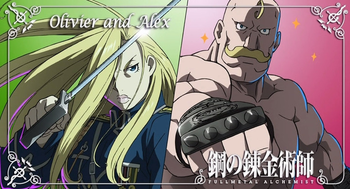 "Might and Finesse have been passed down the Armstrong family line for generations!"
Advertisement:

In fiction, male-female fighting pairs tend to have the guys dealing damage from close range while the girls stay out of the front lines and dish out damage from long range either as an archer or a mage (or both) or heal up the guy doing all the fighting.

Male Might, Female Finesse is basically Force and Finesse combined with stereotypical gender roles. It describes a foil where an Unskilled, but Strong male character is paired with a Weak, but Skilled Action Girl as an Action Duo.

This portrayal and dynamic exists because of the Mars-and-Venus Gender Contrast; stereotypical men are strong and durable while stereotypical women are agile and flexible, and it's rare for them to mix both attributes. This sometimes extends to their temperaments; men would be either boisterous or stiff while women would be more cheerful, open-minded, or sultry (though as they're Action Girl they're definitely never "fragile girls"). Of course, expect inversions every once in a while. For their fighting style, expect the man to be brawling with brute force while the female to be agile and graceful, with the woman tending to exercise She-Fu and/or Waif-Fu.

A Sub-Trope to Men Are Tough and Women Are Delicate. May be part of a Battle Couple, but not always. Can be justified if Huge Guy, Tiny Girl is in play.