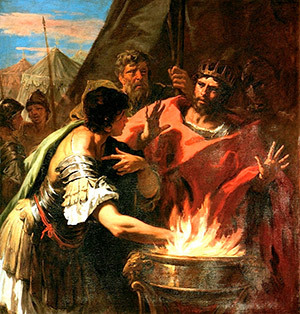 "And there are 299 Roman kids even crazier than me!"

"I started stabbing myself repeatedly in the shoulder just to prove how much tougher I was than him..."
— Spoony, The Spoony Experiment
Advertisement:

Need an instant way to prove you're not a pussy, that you're good enough for a woman, or that you're really dedicated to whatever cause you're fighting for? Injure yourself! Carve a symbol into your own chest, chop off a limb or two, or just punch yourself in the face to show that you can handle it!

As the direct subtrope of Men Are Tough, this is one of The Oldest Ones in the Book, as well as a huge Truth in Television. Compare Self-Mutilation Demonstration, which is a more literal demonstration of resilience to show off one's regeneration powers, not just to look tough. Also compare with Primal Chest-Pound, where the character hits himself in the chest to show toughness and fierceness, but doesn't cause any real damage to himself.

See also, but don't confuse with, Testosterone Poisoning. Goes hand-in-hand with Major Injury Underreaction and Men Don't Cry. For badass injuries that are not self-inflicted, see Real Men Get Shot. This trope is related to Finger Extinguisher.

Also, in case this wasn't obvious, Don't Try This at Home. There can be permanent repercussions (namely, whatever disabilities or less-inhibiting wounds were inflicted), and it's usually not Worth It.