Literature / Daughters of the Moon 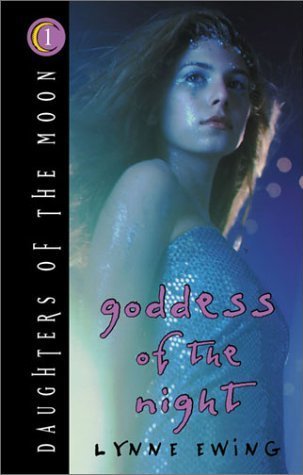 "You are a goddess, a daughter of the moon..."
“O mater Luna, regina nocia, adiuvo me nunc.”
“O Mother Moon, Queen of the Night, help me now!”
Advertisement:

Daughters of the Moon is a series of early 2000's novels by Lynne Ewing. It's about four girls — later five — who find out they're Goddesses. Or, more specifically, daughters of the moon goddess Selene who are destined to fight an ancient evil called the Atrox and its followers, who aim to devour all hope from the world. Each girl has her own Goddess powers as well: Vanessa, invisibility; Catty, time travel; Serena, telepathy; Jimena, premonition, and later Tianna, telekinesis. They must choose when they turn 17 whether to disappear and become a guardian spirit or stay on Earth and lose their powers and memories of everything that happened.

Although it probably wasn't intended as such, the series is notable for being a well-done example of a western Magical Girl series, with a team of girls having powers, magical trinkets, a catchphase-esce prayer mantra, a mentor figure, a love interest who's a former bad guy-turned-mysterious protector, an ancient evil and its minions, relationship drama, etc. The only thing they're lacking is a transformation sequence, but they do get dolled up in order to fight baddies. Not to mention it has an amazingly early 2000s aesthetic.

There are 13 books in the series and each trades point of view between the girls and their friends:

"No one starts the party without us."
"Yeah. 'Cause we are the party!."