Literature / Daughter of Smoke and Bone 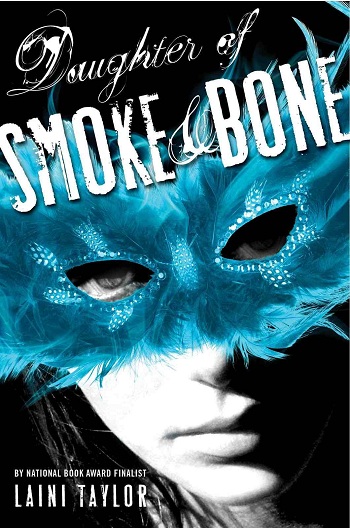 Do you belong here or Elsewhere?
"Once upon a time, an angel and a devil fell in love."
"It did not end well."
Advertisement:

Mysterious, blue-haired, seventeen-year-old Karou leads two lives at once: On the one side, she is a not-so-normal art student in Prague, where she lives in a beautifully decorated flat and meets her best friend Zuzana at fancy cafes.

On the other side, she is the pupil and adoptee of the Chimaera Brimstone, whose head is that of a ram and whose eyes and feet are those of a crocodile, and who works in a shop whose doors open to almost any place in the world, if he only wants them to. Brimstone is a teeth-collecting wishmonger and it is Karou's job to bring those teeth to him. She does not know what he needs them for, nor where she came from or why she was raised among Chimaera in the wishmonger's shop.

Then, mysterious black handprints start to appear on the doors to Brimstone's shop. Karou doesn't think much of it, until she's not able to get in anymore. The drama thickens when Brimstone's messenger approaches her, dying, and leaves her the wishbone Brimstone always wore around his neck and forbade her to even touch.

Akiva is a Seraph, a warrior for an angel empire who are at war with the Chimaera. Even though she works for them, Karou fascinates him deeply and she eventually returns this fascination. Their feeling for each other, as it is revealed, root in an even bigger conflict in the past.

This YA fantasy series by Laini Taylor so far consists of: