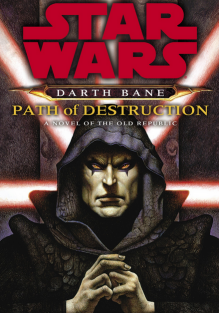 The Darth Bane series is a trilogy of books by Drew Karpyshyn set during the period of the New Sith Wars (roughly 1,000 years before the events of The Phantom Menace). It chronicles the life of Dessel, a cortosis ore miner that joins the Sith's army as a soldier and eventually becomes the Dark Lord of the Sith Darth Bane, the founder of the Order of the Sith Lords that eventually spawned Emperor Palpatine. The first book Darth Bane: Path of Destruction was followed by Darth Bane: Rule of Two, where Bane begins training his apprentice Darth Zannah, and the series concluded in Darth Bane: Dynasty of Evil, which was released on December 8, 2009.

The books are unusual in Star Wars Legends in that they are from the perspective of a character aligned to the Sith. Even more unusual, no attempt is made to portray the actions of Darth Bane as heroic or noblenote That said, during his time as a soldier in the Sith Gloom Walkers spec ops unit, he had a special camaraderie with his fellow squad members and put his life on the line for them many times. Instead, Bane slowly descends ever deeper into corruption and eventually becomes as evil as one would expect the Dark Lord of the Sith to be.

Related to the Darth Bane books is an older comic book series entitled Jedi vs. Sith, which is set around the same time as the last part of Path of Destruction and explains how Zannah and her cousins (Darovit and Hardin) arrived on Ruusan during the final battle between the Jedi and the Sith. Although Bane is technically the Big Bad in this series, his appearances are sporadic. The story focuses mainly on Tomcat (Darovit) and Bug (Hardin) and is arguably closer in tone to The Lord of the Rings than Star Wars. Elements of the series are incorporated into the Bane books in Broad Strokes.

The series as a whole was decanonized with the rest of Star Wars Legends in 2014, but the Darth Bane and Darth Zannah characters and Broad Strokes of the plot were restored to canon by Star Wars Helmet Collection #2 in 2016.

Compare with Darth Plagueis, another Star Wars novel that has two Sith Lords as the main protagonists and also serves as an origin story for both characters.

The books contain the following tropes: