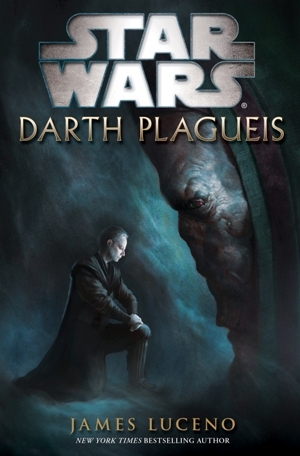 "Did you ever hear the tragedy of Darth Plagueis the Wise?"
Advertisement:

Darth Plagueis is a Star Wars Legends novel by James Luceno set during the final decades of the Old Republic (beginning approximately 67 years before the Battle of Yavin in A New Hope). The plot concerns itself with the life and times of the titular character Darth Plagueis and his dual efforts to conquer the galaxy and achieve immortality through manipulation of the midi-chlorians that connect the Force to its users. After betraying and murdering his way to the head of the Sith Order, Plagueis's journeys lead him to discover a young noble named Palpatine. Sensing enormous potential in the youthful malcontent, Plagueis ensnares Palpatine in the Sith ways and grants him the Sith title of Darth Sidious. The remainder of the book concerns itself with the relationship between these two Sith Lords and how their pursuit of power disrupts The Force and inevitably leads their fruitful partnership to a lethal conclusion.

Darth Plagueis is pivotal in that its content is heretofore unexplored. The history of the saga's Big Bad is detailed, as are new insights (as experienced through the eyes and actions of the Sith) to galactic events that lead to the Empire's rise in Revenge of the Sith. The novel spans decades and even encroaches well into the events of The Phantom Menace, featuring (to varying degrees) characters like Chancellor Valorum, Count Dooku, Darth Maul, Jabba the Hutt, Nute Gunray, Obi-Wan Kenobi, and Anakin Skywalker.

Tone-wise, Darth Plagueis is more cerebral, with more emphasis on history, mysticism, and politics than outright action, affording it a similar nature to Luceno's other prequel-era Palpatine-centric novel, Cloak of Deception. It was released January 10th, 2012.

There is one other interesting facet to note here: this book was one of the very last released prior to the "Great EU Canon Reset of 2014

", meaning it is, strictly speaking, under the Legends banner and not the new canon banner. However, unlike most other EU sources, the very first pieces of "true canon" non-movie material, especially the novel Tarkin (also by Luceno), reference huge chunks of this book outright, reincorporating elements from it into the Disney canon almost immediately. While the book itself has not yet been formally "rescued" from Legends wholesale, it does seem as if it is at least Broad Strokes canon to the new Disney continuity.

See The Darth Bane Trilogy, a series of Star Wars novels which also serve as the backstories for two Sith Lords that would come to influence politics and galactic affairs.