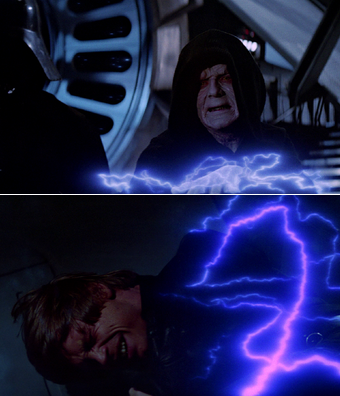 "Now, young Skywalker...you will die."
Cosinga Palpatine: Murder has always been in your thoughts, hasn't it? You've merely been waiting for someone to grant you permission to act.
Sheev Palpatine: I don't need anyone's permission.
Cosinga: Precisely. You're an animal at heart.
Sheev: King of the beasts, Father.
— Darth Plagueis, before Palpatine murders his family
Advertisement:

As a popular franchise, Star Wars and its Expanded Universe have popularized the concept of Redemption and Heel Face Turns, especially Redemption Equals Death. However, Star Wars is still a modern tale of a classic battle between good and evil, the Light Side versus the Dark. Thus, even in the Galaxy Far Far Away, the worst of the worst may still exist.

The "Canon" section is sorted in rough chronological order, while the "Legends" and "Others" sections are sorted by alphabetical order in each media category.

Knights of the Old Republic franchise