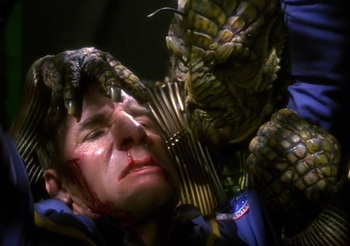 "You don't want to know my specialty."
"...You will all die in pain and terror at my merest whim...You will all fear my name and suffer horribly at my touch, and your pain will last an eternity until I have had my fill of your pathetic, human..."
—Redjac, "Wolf on the Prowl" comic

While Star Trek, including the Trek Verse and the Star Trek Expanded Universe, usually gives villains a few redeeming qualities, there are some who lack any at all, and seem to revel in just how far past the Moral Event Horizon they're willing to go.