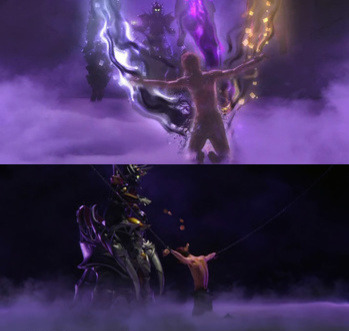 "Come on! Let me hear more screams!"
"Our invasion is all that is left...There will be no resistance! Attack, kill, plunder! Our motto is destroy and slaughter. After we completely destroy the nations's society...we can begin the world of our Black Cross Army."
—Black Cross Fuhrer, Anthem of the Black Cross Army, Himitsu Sentai Gorenger
Advertisement:

Whenever Super Sentai decides to go Darker and Edgier, expect these kinds of creeps to appear. Of course, the Lighter and Softer ones might not be excluded from this...