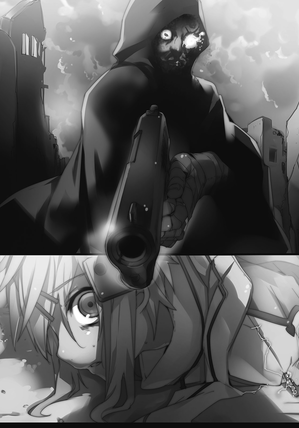 "Let your fear carve one name into your brains, the name I share with this weapon: Death Gun!"
Johnny Black: Let's play the game where they have to kill each other! Last one standing wins!
PoH (no angel himself): I know it's your favorite but last time we did that you killed the winner anyway.
Johnny Black: Oh come on! You spoiled it! It's no fun if they know they're gonna die!
—"Illusionary Avenger"
Advertisement:

The various games making up the Sword Art Online universe are home to numerous villains, some worse than others.

Entries are where the character had the most impact.