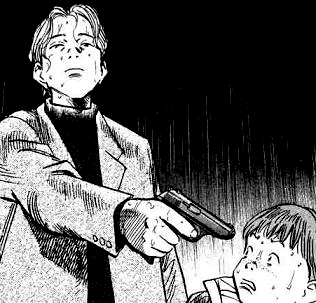 "I saw hell right there in his eyes. Hell. In the eyes of a living human being."
"No, friends, I love war! I love holocausts. I love blitzkriegs. […] The sight of deserters being strung up from a street lamp is an irresistible pleasure. And there is nothing more arousing than the sounds made by prisoners of war dropping like flies, screaming in agony as they're mowed down by ear piercing schmeissers! When a band of pitiful resistance fighters makes their final stand with nothing but small arms, only to have their city smashed to atoms block by block by 4.8 ton bombshells... I'm in ecstasy."
— The Major, Hellsing
Advertisement:

Anime and manga creators have created a wide variety of villains, and some of them are especially cruel and horrific.

Manhua, Manhwa, and Light Novels are also included here (though some of the latter may also be found at Literature).