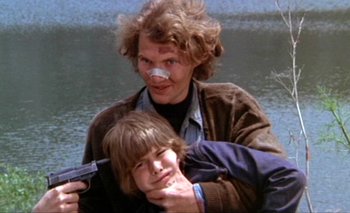 They say they wanted to pick an actor for Scorpio who "had the face of a choir boy."
"He is the most evil character I've ever played in my career. It is impossible to improve upon it; the character is so solid and so well written. Vidal is deranged, a psychopath who is impossible to defend. Even though his father's personality marked his existence—and is certainly one of the reasons for his mental disorder—that cannot be an excuse. It would seem to be very cynical to use that to justify or explain his cruel and cowardly acts."
— Sergi Lopez talking about his character Captain Vidal from Pan's Labyrinth
Advertisement:

Movie villains are quite the varied lot as any browsing of the Villains page will tell you. This page particularly covers the absolute worst of them, whose utter cruelty and horrible deeds are more than enough to earn these villains a special place in Hell.

Alternatively, you may have wanted Monster.