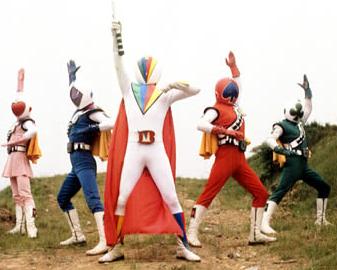 JAKQ Dengekitai (Jacker Blitzkrieg Corps) is the second Super Sentai seriesnote Although rights issues forced Toei to consider its successor, Battle Fever J, as the first series throughout the late 80s and early 90s, aired in 1977. It lasted only 35 episodes (the shortest run of all Sentai shows) and a later crossover movie involving Goranger. It was the last one to involve the creative influence of Shotaro Ishinomori.

The evil organization, CRIME, sets out to become the greatest criminal organization in the world. Only ISSIS (International Science Special Investigation Squad), a sector of INTERPOL, has the resources to stop the threat. They recruit four people to become playing card-themed cyborg warriors, the JAKQ Dengekitai, in order to take down CRIME.