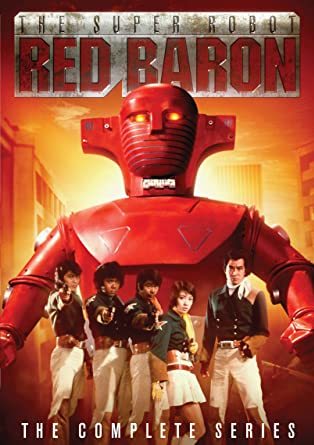 Our Five-Man Band and their Red Humongous Mecha
Fight lever, ON!
Advertisement:

Super Robot Red Baron (スーパーロボット レッドバロン Sūpā Robotto Reddo Baron) is a Super Robot Tokusatsu series that aired in 1973. In the early 21st century, an evil organization called the Iron Alliance steals giant robots built all over the world from an exhibition and kidnaps their creators, with an ultimate goal of taking over the world and enslaving humanity. Predicting their invasion, Scientist Kenichiro Kurenai passes on the titular robot, Red Baron, to his younger brother, Ken, a member of the paramilitary group SSI (Secret Science Investigation). He uses the Red Baron to aid the SSI's efforts in thwarting the Iron Alliance and saving the world.

It also has a sequel titled Super Robot Mach Baron

Animated Adaptation done in the year 1995 by TMS Entertainment which changes the story drastically.

In 1986, a Taiwanese company acquired the rights to the show and edited them into an 86-minute standalone movie, titled The Iron Superman. It's one of the most incoherent and unintentionally hilarious shows ever made

In 2017, the characters were rebooted alongside fellow 70s toku series Silver Kamen in the movie BraveStorm by special effects artist Junya Okabe.