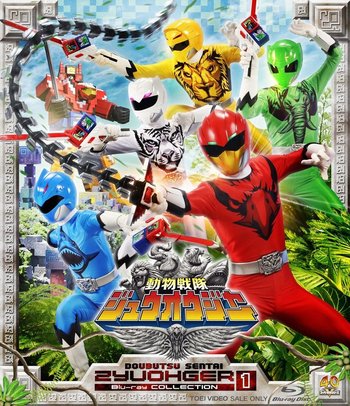 INSTINCTS AWAKENED!Original line Honnō kakusei!
A planet where innumerable lifeforms live, Earth.
One human and four Zyumans band together, and a team is born in order to protect Earth!
Advertisement:

Zyuland is a parallel dimension existing alongside Earth and inhabited by a race of Beast Men called Zyumans. While exploring a forest, amateur zoologist Yamato Kazakiri stumbles across a strange cube-shaped artifact which teleports him to Zyuland, where he meets the four zyuman guardians of the "Link Cube" which connects our worlds.

But when Earth suddenly comes under attack by the extraterrestrial Dethgalien, who are intent on turning the planet into a battleground for their blood sports, the guardians draw power from their "King's Credential" cubes and transform into the champions of Zyuland. Stepping up to the challenge, Yamato realizes that his childhood good-luck charm is a long-lost King's Credential and joins the team as Zyuoh Eagle.

With the Link Cube damaged and the sixth King's Credential needed to activate it having gone missing in the Dethgalien attack, the four zyuman are stranded on Earth. Now they must adapt to a whole new world while fighting alongside Yamato to defend all animals on Earth as the Doubutsu Sentai Zyuohger!