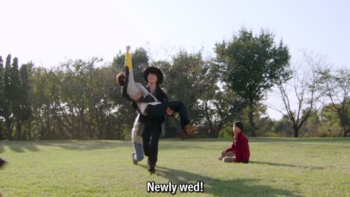 Below is a list of the Ho Yay found in Doubutsu Sentai Zyuohger, although it consists mostly of Misao interactions with other characters. He has strong, recurring Ship Tease with both Yamato and Tusk, and with Kinji during the Vs. Movie.

Interestingly, he doesn't have any with Leo, this could be both down to their limited interaction and Leo being portrayed as the 'manliest of men'.