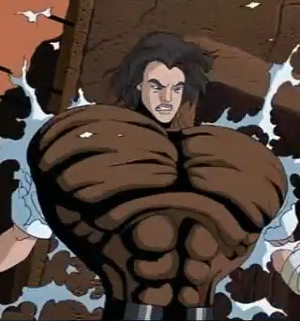 A sub-trope of Transformation Sequence where an increase of muscle mass and definition is prominent. It can be used by a character transforming to his superpowered form, as well as a visual indicator of a Super Mode activating. In either case, those subjected to it are generally expected to possess Super Strength.

The sequence usually consists of close-up shots of various muscle groups, most commonly the biceps, chest, and back, growing and becoming more defined. As a result, expect Clothing Damage (with the exception of Magic Pants). The transformation doesn't have to be limited to changes in musculature; for example, a villain can have Spikes of Villainy popping up along the spine of his expanding back. Bulking up is also unexpectedly common in modern werewolf transformations, despite the wolf being an animal generally regarded as lean rather than massive.

Depending on the character and the setting, a Growing Muscles Sequence can be voluntary or involuntary, range from painless to painful to a Body Horror and its end result can run the gamut from having a Heroic Build to being The Grotesque.

Mark Beaks uses Gandra Dee's nanite tech and serum to make himself more powerful than Gizmoduck. Unfortunately, he drank way too much serum.

Mark Beaks uses Gandra Dee's nanite tech and serum to make himself more powerful than Gizmoduck. Unfortunately, he drank way too much serum.