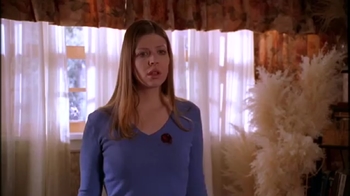 Willow and Tara snuggle in bed together after their reconciliation, discussing the possibility that something is going on between Buffy and Spike. Tara confirms Willow's suspicions, adding that Buffy feels ashamed of her sexual relationship with Spike. Though Willow is hurt that she was never told, she puts it aside when Tara informs her that she is reacting exactly how Buffy feared she would react. Willow goes to check on Buffy, but instead encounters Dawn in the hallway. When Tara appears wearing just a sheet, Dawn is thrilled to see they are back together.

Buffy, meanwhile, has decided to take care of The Trio once and for all and breaks into their lair, but finds the place deserted and dangerous traps waiting for her. She escapes, managing to grab a few items before large saw blades tear apart the house. Buffy, Dawn, Willow, and Tara gather to go over those items, realizing sadly that the rest of the group won't be helping since they all have other priorities or lack interest. Anya sits with a young scorned woman who wants to wish vengeance on her cheating boyfriend, but Anya is too busy talking about her own relationship problems to notice the young woman's wish. Dawn visits Spike at his crypt, informing him that she knows he had sex with Anya and Buffy. She lectures him about hurting Buffy when he supposedly loves her and leaves him pondering the thought of how he shows his love to her.

Meanwhile in a cave, The Trio kill a large Nezzla demon who is guarding the Orbs of Nezzla'khan. Warren and Andrew make Jonathan wrap himself in the dead Nezzla Demon's skin to cross a barrier that can only be passed by one of the demons, and as he fetches the Orbs, the other two conspire against him. Warren tests the power of the Orbs and is pleased when he can easily kill another demon.

Xander, aghast that Buffy could have been involved with Spike, storms out of an argument with Buffy. He walks the streets alone, pausing briefly to secretly look in on Anya as she works at the Magic Box. He ends up at The Bronze, drinking away his sorrow over Anya and Spike when The Trio enter. Orb-enhanced Warren hits on a former schoolmate's girlfriend, and when the woman's boyfriend steps in, Warren fights off the boyfriend and several others with ease. Xander tries to intervene, but is tossed aside, and Warren comes very close to killing him before Jonathan and Andrew intervene and inform him of their "job" tonight.

Later, at home in bed, Willow reviews some files on her laptop, but is quickly distracted by Tara. Buffy, badly injured from patrolling earlier, sets up a bath for herself to soothe her aching back. Spike shows up uninvited and tries to convince her that she loves him and just needs to admit it. She admits that she does have feelings for him, but it's not love because she can't trust him. Spike argues that trust is irrelevant, that true love burns and consumes. Buffy retorts that kind of love doesn't last. Spike, thinking this is another example of their sexual push and pull, tries to "make her feel it", thinking sex will make her love him. She protests as he forces himself on her; with her back injured, Buffy barely manages to stop him from raping her. Spike is immediately stunned by his behavior and tries to apologize, but Buffy knows he only stopped because she made him. When Xander notices Spike's coat on the stairs, then finds Buffy on the floor in the bathroom with a large bruise on her leg, he realizes what has happened. His desire to go after Spike is thwarted when Willow and Tara arrive to tell Buffy they found plans indicating The Trio are planning to steal a large amount of money. After Xander warns her of Warren's new strength, Buffy rushes off to stop them.

Returning to his crypt, Spike thinks back on his attempted rape, questioning what Buffy and the chip are doing to him. He pours himself a drink, but becomes infuriated not that he attacked Buffy, but that he backed off - something the pre-chip Spike would never have done, especially with the Slayer wounded, but also at the same time feels disgusted with himself that he actually did such an act and with that crushes the glass in his hand. Just then, Clem comes by and Spike begins to wonder exactly what he is. He realizes aloud that he is not a monster, yet can't be a man. Clem tells him that things change, and Spike suddenly gets an idea, and tells Clem that things do change... if you make them.

Warren overturns an armored car loaded up with money from a big weekend at an amusement park. Buffy shows up and fights him, but Warren quickly gains the upper hand. No matter how hard Buffy hits, Warren counters twice as hard. Warren taunts Buffy with his supposed mastery, boasting that he has finally bested the Slayer when no one else has ever done so. Jonathan jumps on Buffy's back and appears to be fighting her, but he quietly informs her that she needs to smash the Orbs in order to defeat Warren. Warren finally overpowers Buffy and has her at his mercy, but Buffy, noticing the pouch containing the Orbs of Nezzla'khan on his belt, immediately grabs it and destroys them before kicking the now-depowered Warren full force in the chest. As a visibly enraged Buffy advances, Warren, outraged and humiliated, uses a hidden jet pack to escape freely into the sky, but not before swearing that he will take Buffy down. Andrew reveals he too has a jet pack, but when he tries to escape, he only knocks himself out on the overhanging roof above him. As the cops haul Jonathan and Andrew off to jail, the jet pack-less Jonathan realizes that the two were about to betray him.

Meanwhile, at the city limits, Spike boards his motorcycle and leaves Sunnydale. He makes a promise that when he returns, things will be different.

Willow and Tara get dressed and while hugging, Tara notices Xander and Buffy in the backyard together. Buffy and Xander begin to discuss Buffy's relationship with Spike, and Xander tells her that he was hurt she didn't trust him enough to tell him about the relationship but accepts that he gave her plenty of reason to believe he would react badly. The two accept they've made some very bad choices recently but know they can't imagine life without the other, and they make up...

Only for Warren to enter the backyard, ranting about his recent defeat and declaring his intentions of revenge; deciding to go for the simple approach, he produces a 9MM and aims directly at Buffy. She pushes Xander to the ground, taking the bullet as Warren starts shooting randomly. One of the bullets breaks the window to Willow's bedroom... and in the most infamous and heartbreaking moment in the entire Buffyverse, said bullet strikes Tara right in the heart. Willow is then covered in the blood of the love of her life as Tara only has enough time to say "Your shirt..." before the hole in her chest registers and she collapses. Xander tries to stanch the bleeding of Buffy's chest wound, while in the house, Willow cries out as she holds Tara's lifeless body and her eyes turn magically dark red with pain and fury.