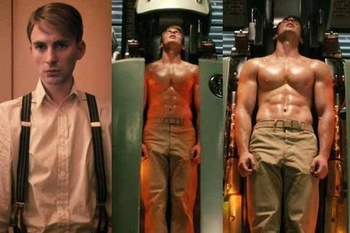 A common form of Wish-Fulfillment among those who are out of shape. Most people would exercise or get Training from Hell if they want an amazing body like those characters in TV shows, comic books, or cartoons. Well, if one gets this sort of makeover, he or she won't have to!

We have ourselves a scrawny, chubby, maybe just plain ugly person. But then some supernatural event happens. This character has either been bitten by something radioactive, met a dying alien, ate a special type of food, or maybe made a deal with the devil. Now that unappealing person has superpowers and a brand new sexy body! Fanboys and Fangirls are now screaming just to see more of him or her on screen or page.

May have something to do with the Most Common Superpower.

Subtrope of Power Makeover. Often the Justified Trope of a Heroic Build. Compare Frilly Upgrade, Bishōnen Line, Progressively Prettier, and Sexier Alter Ego. Contrast Power-Upgrading Deformation and Evil Makes You Ugly. May involve Transformation Sequence and/or Growing Muscles Sequence, and may be part (or all) of the awesome in Cursed with Awesome.

Gamma Is A Girl's Best Friend

Bruce angsts about having turned his cousin into a gamma mutant, but Jen/She-Hulk doesn't mind because she much prefers her new appearance and powers.

Gamma Is A Girl's Best Friend

Bruce angsts about having turned his cousin into a gamma mutant, but Jen/She-Hulk doesn't mind because she much prefers her new appearance and powers.