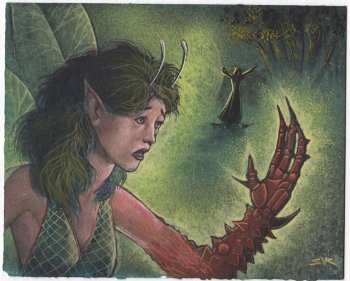 fairy's tale just got very point-nant.
"You saw the beauty side of me before! Now, with great pleasure,
I introduce you to the BEAST!"
— Zarbon, Dragon Ball Z
Advertisement:

A Power-Upgrading Deformation will make a character or creature much stronger but also make them look at the least inhuman and at the worst horrendous — and the process isn't likely to be pleasant or pretty either.

Unlike the Psycho Serum where an ugly appearance can be a side effect, for the Power Upgrading Deformation the newly ugly appearance is the source of the enhancement: like sprouting Combat Tentacles, pincers, supermassive muscles, My Brain Is Big, grotesque Cybernetics, etc. Because of this it would technically still be considered a Magic Enhancement or Super Serum and not Psycho Serum.

If the setting has a Bishōnen Line, this drug, technology or spell will take the character to just before the return to prettiness (or if already there, start the cycle over). It's also worth noting that protagonists and main villains may get off easy with alterations that are weird, but cool-looking (or not even weird at all) and way more powerful while Mooks and secondary characters aren't so lucky.

The deformation may be a mix of: permanent (requiring a cure to remove) or temporary (granting a Super Mode), and perfectly stable (no more mutations) or continuously changing (risking falling to The Corruption or Power Degeneration). Because its effects are so nasty taking it tends to be treated as a Godzilla Threshold, with only the direst of situations meriting it. Villains like the Mad Scientist and Evilutionary Biologist will delight in kidnapping victims to use this on... usually paired with a Mind-Control Device of course! note (Can't have a Phlebotinum Rebel, now can we?) On the other hand, some villains may take it themselves, become a One-Winged Angel and proclaim A God Am I! Truly, Evil Makes You Monstrous. Mind the Clipped-Wing Angel from overdosing.

Compare Dangerous Forbidden Technique, Evolution Powerup, One-Winged Angel, Hulking Out, Cursed with Awesome and Transformation of the Possessed. See also Beauty to Beast and Deadly Upgrade. Pretty much all Lovecraftian Superpowers result in this. Contrast With Great Power Comes Great Hotness and Bishōnen Line, when power makes you more attractive.