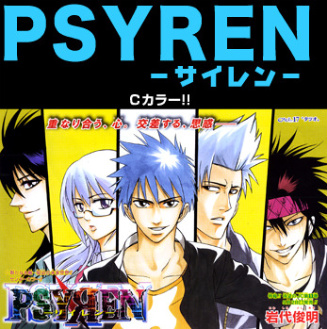 From left to right: Oboro, Sakurako, Ageha, Hiryuu, and Kabuto
"Please save me..."
"TO THOSE WHO SEEK PSYREN, DESPAIR AND POWER!"
Advertisement:

Psyren begins with a focus on highschooler Ageha Yoshina, who runs a service where he will help anybody with their problems for the flat rate of 10,000 yen. One day, he answers a pay phone ringing by itself, and receives a red calling card with the word "Psyren" on it. After filling out a questionnaire over the phone, he receives another call that transports him to another world.

Here he encounters Sakurako Amamiya, a girl in his class who often misses class for very long periods of time, and Hiryuu Asaga, an old friend of his from middle school who went to another high school. Sakurako explains that this world is Psyren, and as part of a game they must traverse the perilous landscape, avoid the monstrous creatures called Tavoo, and reach the nearest pay phone to return home.

After their first hellish trip through Psyren, Hiryuu and Ageha develop abilities called PSI from being exposed to Psyren's atmosphere. They also learn that they will have to constantly go back to Psyren until the number on their calling cards reduces to zero. From there the series escalates fast.

It was published in Weekly Shounen Jump from December 2007 to November 2010 and has been licensed by Viz Media. It was written and drawn by Toshiaki Iwashiro. Volume 1 appeared State-side December 2010. Also it has two light novels written for it.