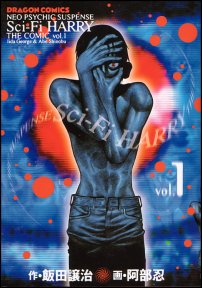 Power can be a dangerous thing...
Sci-Fi HARRY is a 2000 psychological-horror anime series adapted from a 1995 manga series written by George Idia and Asami Tohjoh. The series is about Ordinary High-School Student Harry MacQuinn, who due to social awkwardness has always been labeled an outcast and a loser at his school. One day however, with the help of the star basketball player's girlfriend, Catherine, Harry manages to unlock his unique telekinetic psychic powers. Recently, however, there's been a series of strange deaths in which the victims were killed the same way, which Harry's new found psychic powers may be connected to...
Advertisement:

The central characters are:

Harry McQuinn (voiced by Ryu Itou): A shy and withdrawn teenager who one day discovers that he has powerful psychic abilities. Though he initially plans to his newfound talent to become famous, a series of horrifying events force him to flee as he desperately tries to keep these powers under control.

Catherine Chapman (voiced by Yui Horie): Harry's kindhearted classmate and pretty much the only person who is nice to him at the beginning of the story. Catherine initially encourages Harry to share his powers with the world, believing that this will help his self esteem. After things go horribly wrong, she resolves to protect him from The Accuser.

John Mayfield (voiced by Susumu Chiba): Catherine's wealthy boyfriend and a star athlete and student. He is the first to suspect that Harry may be at the center of some sort of sinister conspiracy, and resolves to help him out.

Mike Stafford (voiced by Nobuo Tanaka): A veteran police detective who first crosses paths with John and gets caught up in the conspiracy surrounding Harry while investigating a series of mysterious murders involving broken necks. After being placed on a forced vacation due to a cover up, he becomes an ally to the teenagers and tries to help them unravel the truth.

Kate (voiced by Yoko Soumi): A scientist who works for The Accuser, a clandestine organization dedicated to the study of psychics. She is tasked with capturing Harry for experimentation, but is also ordered to eliminate the boy if he proves to be a threat, something she becomes greatly conflicted about.

Ginori (voiced by Yukana): A mysterious psychic girl who befriends Harry during his escape from the Accuser facility. Despite supposedly wanting to help him, it quickly becomes clear that she has a ruthless streak and unknown ulterior motives.

The Fatman (voiced by Kôichi Nagano): A morbidly obese man who constantly spies on the main characters and manipulates them from the shadows, often sending them clues and teasing messages.

While the series was popular enough to warrant an anime, it is unfortunately rather obscure.