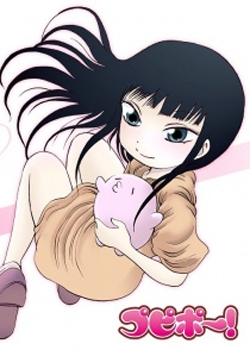 Pupipo! is a manga by Rensuke Oshikiri (who would later create High Score Girl), which was serialized in Flex Comix Blood from 2007 to 2009 and compiled into three volumes. An anime adaptation aired from 2013 to 2014 for 15 episodes.
Advertisement:

Wakaba Himeji is a 5th grader with a peculiar problem: She can interact with spirits and ghosts. Her ability has made her an avoided outcast at school, and victim of verbal bullying from a gaggle of mean girls.

Walking home from school one day, she looks out at the sunset...and then notices a box on the street. Inside this box is Po, a bizarre little pink blob creature. Turns out Po can see these spirits too. And more importantly, beat them up when they pester Wakaba.

Rounding out the bunch is new student Reiko Azuma. A bizarre bespectacled girl fascinated by the occult, who quickly becomes Wakaba's best friend.

The three go about their routines, while Wakaba wishes there was some way she could be free of her pesky powers...

Azuma: You are already dead.
Ghost: 'Course I am, ya numbskull!