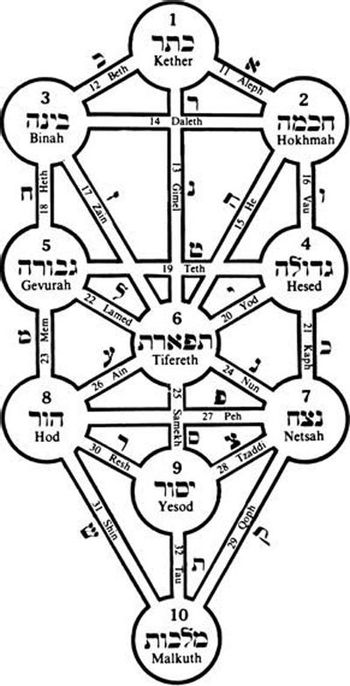 The Sephiroth, or Tree of Life
Advertisement:

Kabbalah is a form of Jewish mysticism. Like Gnosticism (which it's sometimes said to be descended from), in its most basic form, it concerns the division between the material world and a spiritual world of nothing but light. Due to a complicated chain of events, every human being has a fragment of this light in them, which is the soul. The realm of light is the Jewish god "as He is in Himself", AKA the godhead. This godhead has absolutely no qualities, as to give Him qualities is to limit Him; instead, He is said to contain and transcend anything and everything. However, He can manifest in the material world through ten virtues called "Sephirot" or "Sephiroth" (the singular is "Sephira"), and following these ten virtues makes a Kabbalist a more godly man until he shines with the Divine Light.

The origins of the doctrine depend on who you talk to. Either it took shape in 13th century Spain with a group of Jewish mystics, or it was divinely revealed to Moses during the Exodus, or even to Adam in the Garden of Eden, if you're a believer. Different Jewish denominations have different stances towards Kabbalah. More modern denominations, such as Reform and Conservative Judaism, think Kabbalah itself is nonsense but the academic study of Kabbalah is valid scholarship. Chassidic Judaism, on the other hand, takes Kabbalah pretty seriously, and Orthodox Judaism has views in both camps (and sometimes a position in the middle). It has reached wide popularity via a shiny, Power-of-Positive-Thinking version that Madonna has been wearing since about 1997, but this is only one of the dozens of movements trying to claim the word as their own. Books about Kabbalah tend to have less in common with one another than books about cooking do.

The word means "The Tradition" in Hebrew, and it usually means "The Secret Traditional Explanation of Everything," so it has been fights and collaborations between rivals since the beginning. Who wouldn't want to fight over that? The version of the Kabbalah that got big in 13th century Spain was deeply entrenched in the Jewish religion and tended to deal with the questions that bothered 13th century Jews, such as "Why are we following these Laws?" "How did the Universe come about?" "What's with all these contradictions in the Bible?" They weren't new questions, but kabbalists found some new ways of asking them, usually by looking for hidden messages in the Torah using mathematics, reading Hebrew words as numbers, and numbers as the stuff the universe is made of. Particulars were debated, but the hidden message tended to be that the Universe is made of parts that are out of harmony, but if all Jews were to follow Jewish Law, the universe would be fixed. The Zohar and the writings of Abulafia are the classic from this period, the first being more like sacred adventure stories, and the second being training manuals for prophets. They both claimed to have the ancient secrets, but they disagreed on most specifics.

And since then people have continued claiming that their newly discovered version of the ancient tradition is truer than all of the other newly discovered versions. In the Renaissance, Christians discover that the secrets were actually Christian secrets, and Masons later discover that those Christian secrets were also Egyptian or Babylonian secrets. People like Aleister Crowley discovered that these Masonic had always been magical secrets, or that they explained everything from Taoism to Quantum Physics. From the Jewish side, the "Ari" (an acronym meaning "Lion") Isaac Luria discovers some details about how our universe is on top of a shattered previous one, in the sixteenth century. Hasidism makes it folksy, dancey, and dynastic in the eighteenth century. The popular new ones are strange, but it would be hard to show that they were stranger than the ones that were new before.

The Kabbalah is also known for the snazzy tree pattern known as the Tree of Life, whose leaves are the Ten Sephirot, connected by 22 paths called the Partzufim, which are each associated with one letter of the Hebrew alphabet. These ten spheres are connected in a pattern that shows ten virtues through which God emanates into our level of reality, and conversely how humans can ascend back up and reach Him. The ten Sephiroth, along with what they represent (note that there are many possible transliterations of their names from Hebrew) are as follows:

Additionally, there is Da'at (Daath), which is not numbered, but is the central state of unity of the other ten.

These meanings may become important in Theme Naming.