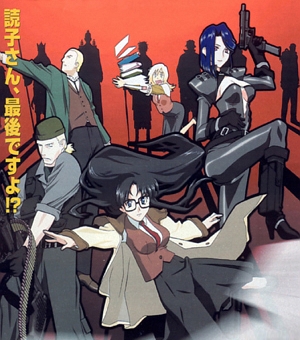 Read or Die is a three-episode OVA set in an alternate late 21st-century Earth with rare and mostly hidden superhumans. The story centres on the adventures of Yomiko Readman, an eccentric yet adorable bibliomaniac who is also a part-time substitute teacher and a super-powered agent for the British Library's secret intelligence division. Codenamed "The Paper" by the British Library, Yomiko possesses elemental paper powers—in other words, she can manipulate paper in practically any way imaginable. She also has an insatiable addiction to reading, which she feeds by spending thousands of pounds a week on books. Due to her work and her quirks, Yomiko is an odd combination of giggling innocent schoolgirl-ish woman—she gives off a distinct impression that her mental age and, er, general level of life experience are those of a twelve-year-old—and stone-cold killer.

The OVA follows Yomiko as she and a pair of fellow agents work to stop a mysterious group of supervillains who call themselves "I-jin" ("Geniuses") and resemble notable figures from history. The I-jin want, amongst other things, a book once owned by Beethoven that Yomiko has recently purchased, within which lies the key to an evil plan with world-wide consequences. This conflict plays out as a globe-trotting rollercoaster ride of action, friendship, betrayal, wild plot twists, and a small leavening of sly humor. The show's superheroes are also far more Western in concept than sentai—atypical for a Japanese production—but the writers and producers make it work, showing a clear level of comfort with the idiom.

Read or Die was originally a book series, then a manga. The OVA follows some of the characterization introduced in the first manga chapters but drastically becomes an Alternate Continuity. When the OVA became a popular success, the creators followed it up with a 26-episode TV series titled R.O.D the TV (ROD TV or R.O.D. the TV Series in the West), which also became a popular success.

: "R.O.D. Rehabilitation", set in a Darker and Edgier Alternate Universe, features a different Yomiko who lives in a world where the printed word has been declared obsolete and the few remaining bibliophiles left are trying to create a rebel city-state.

There is a stalled community project to translate the original novels.