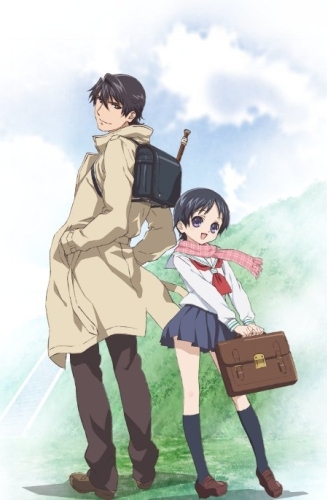 Atsushi Miyagawa is an elementary student who looks like an adult. His older sister Atsumi is a high school student who looks his age. Since they act like you'd expect kids their real ages to act, this can cause... problems.

Recorder and Randsell is an ongoing Seinen yonkoma manga by Meme Higashiya, running in various Manga Life compilations by Takeshobo since 2007. It was adapted into a three-minute anime that began airing in January 2012 and was licensed for simulcast by Crunchyroll

A second season ran later in 2012, and a third season aired in the summer of 2013. The manga's fourth volume came packaged with two OVAs as well, and an unaired 13th episode came with Mi's boxed set.

And if you're wondering, "randsell" refers to the type of backpack Atsushi's wearing.