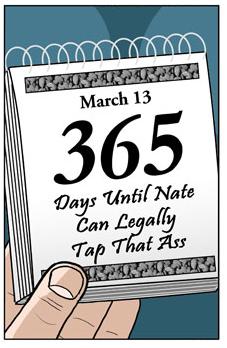 As good a 17th birthday present as any.
"The only reason to wait a month for sex is if the girl's 17 years 11 months old."
— Barney Stinson, How I Met Your Mother, "Zip, Zip, Zip"
Advertisement:

An older character holds back from romantically/sexually pursuing someone younger until the latter reaches a specific age at which point they're considered an adult. 18 is the most common, but it can be older or younger depending on the jurisdiction and time period.

The reason could be based on local laws, or because the elder of the two wants to stick to a personal moral code. Because even if the legal age of consent is lower than the age of adulthood, it is such a moral gray area that most people in this position prefer to wait until their crush is 100% considered an adult before pursuing them, to eliminate most ethical concerns. We say "most" because some might still question the inequality of such a pairing, but at least the older partner won't go to jail for it.

The delay is solely and explicitly because of the age of the younger character. Because of the association between marriage and sex, choosing not to attempt marriage until the chosen age also qualifies as an example.

See Jailbait Taboo for discussions of the taboo surrounding an older character dating a character below a certain age.