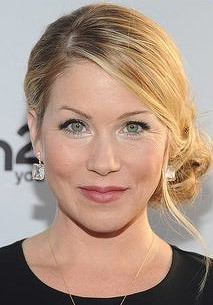 "I started doing radio commercials for Kmart when I was 4. They had to splice all my consonants together because I couldn't talk very well. But these jobs helped my mother and me put food on the table. It took the two of us working."
Advertisement:

Christina Applegate (born November 25, 1971 in Hollywood, California) is an American actress. If you're of a certain age and you remember the raunchy FOX sitcom Married... with Children, you'll know her as Kelly Bundy, the sexually promiscuous, dumb blonde teenage daughter of Al Bundy (played by Ed O'Neill) and Peggy Bundy (played by Katey Sagal). Her most notable roles beyond that were in the films Anchorman: The Legend of Ron Burgundy and Anchorman 2: The Legend Continues and in the series Samantha Who? and Up All Night. She currently stars in the Netflix series Dead to Me. She also voiced Brittany in the Alvin and the Chipmunks and Mary Beth in The Book of Life .